The book is based around TED talks (ww.ted.com). TED was introduced in 1984, where pioneers from 3 disciplines (Technology, Entertainment and Design) were invited to share their thoughts, expertise or an idea worth spreading. This book takes you to a short journey in history of TED, how one event started in 1984 has spread, inspired and changed the life of millions of people around the world.

TED is becoming from a local phenomenon t 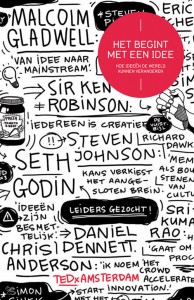 This book builds on the power of ideas also described as memes. Meme is an idea a thought which reproduces, spreads and evolves like a gene. Memes do not have a biological evolution but they are evolving and are struggling for the survival of the fittest. Memes reproduce with each other and through process of natural selection are competing in the pool of other memes.

Memes of democracy are in competition with memes of communism, memes of  religion are competing with  memes of science.