Pir-E-Kamil is an Urdu novel. A good friend insisted that I should read this novel, that i would enjoy reading it, and i really did. 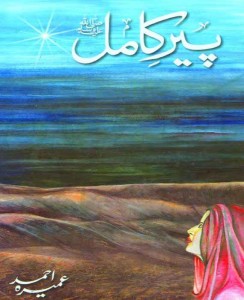 y is about 2 main characters, Imama Hasim who is a very   religious person converted from Ahmadiyya to Islam. Who is totally devoted to Islam and then  there is Salar Sikander a highly intelligent person, who sees no meaning or purpose in anything…

I enjoyed the writing style of the writer, it’s exciting to read this novel. The writer plays with different perspective of different characters on the same situations in a non-chronological order.  For instance she writes certain event from Imama’s perspective and the same situation from Salars’s perspective which gives you a full spectrum of feelings and thoughts present in a certain situation. In the beginning one cannot see the relationship between the main characters and why the writer is telling totally separate stories and how they relate to each other, but as the story progresses, you see the strong connection between the two.

The story is about search for meaning in life choosing ones on path despite the adversaries. It is about contemplation on the actions and repenting on the mistakes on has made. Finding meaning in something which is greater than one self. There is a moral teaching in the story, the story makes more sense if you have the background of Pakistani culture, lot of things will seem odd or strange to non-Pakistani reader.

The fate and the chance are given a fair trial in the story. How to people, meet each other in the strangest situations, how their path depart from each other’s life, how they hold each other responsible for their misery, how they become each other’s perfect mentors and how fate or chance brings them together again in an unusual way. Where hate has turned into love, anger has converted in understanding and selfishness has made place for others.

There is an evolution in the character of Salar Sikander from godless person to godly person, which really pulls you into the story.

Although the main emphasis of the writer is put on Islam through the whole story. In my opinion the story is not so much about believing in Islam but worshipping in general in  something which is far greater than oneself. That could have been accomplished by any other means than religion and it would not have made any difference to the story.