After 18 years I came an old friend across. He had grown now to a handsome young man with a very successful business and a beautiful wife. He used to be bullied very harshly on the high school. There was group of guys who used to pick on him for no reason. That was my first lesson in the art of war “There will be those who will hate you for no reason”. 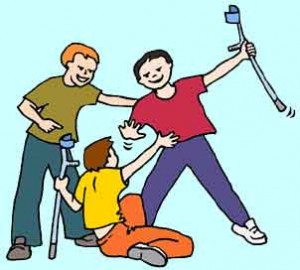 They used to hit him, spit on him, eat up his food, one time they threw him in a deep channel, his clothes, his books everything was wet, he almost drowned in the water. It took me ages to get him out of water. I remember he cried for hours there, there was mixture of fear and anger in his eyes, blood rushed through his veins. I never forgave myself for my cowardliness, I never helped him at the time of his real need. Here I learned the second art of war (“Sometime you must kill to survive”).

As we stood there after 18 years, he looked at me and a tear dropped from his eyes. He said to me, “do you remember those days”? There was a pose of silence. I asked him, “what would you do if somebody like them came again in your life”. He replied, “I will cut there throat, drink there blood, boil their skin and feed it to the dogs”. There was a scary seriousness in his eyes and a determination to do so, if ever! Before leaving he hugged me and thanked me for those days.

That day I learned another valuable lesson in the art of war “little help is better than none”.